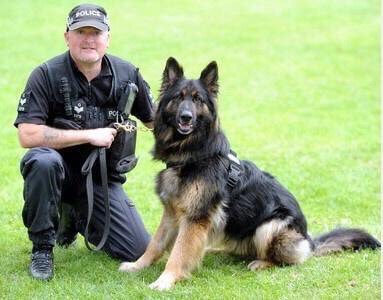 Back in 2010 a young German Shepherd dog called Juke was destined to become a Police Dog. Described as wilful and full of beans the owners with young children struggling to cope with his boundless energy put him up for adoption on the pre loved site.

Sergeant Geoff Blindell from Gloucestershire Constabulary looking for a replacement for his recently departed Police dog took the journey down to Barnstaple to view the dog and the rest they say is history.

Juke who had now become BEAR due to another Duke on the section took to Policing like a duck to water and a great partnership was born.

The Team have been commended by the Chief Constable and PCC for their outstanding Community work, visiting care homes and schools provding talks and advice about their role and that of the section.

Bear has tracked to offenders involved in burglaries, car crime, saved suicidal missing persons and been involved in Firearms operations and major sporting events, such as the Champions league final in the Millennium stadium, Cardiff in 2017.

During a particularly busy fireworks night in 2015 Bear and his handler responded to a burglary in progress. BEAR was deployed and picked up a track, despite fireworks firing off all around them BEAR remained committed to the track and after some distance through the estate, into a large play park located 2 males carrying large carrier bags full of items. BEAR immediately fired up at the males having tracked to them and began barking, one decided to make a run for it and as BEAR was about to be deployed the second male threw a punch at PS BLINDELL which he had completely missed being focused on the male running off. However his partner didn’t and rather than chasing down the fleeing male spun round and took the males arm which narrowly missed PS BLINDELL. The male was detained until back up arrived and was arrested for the burglary with all the property recovered from the dropped carrier bags.

In 2016 in the early hours a young male armed with a knife had made off into a building site in the Forest of Dean intent on committing suicide. The local Officers struggling to locate the male due to the size of the area and prevailing weather conditions requested the assistance of a dog. PS BLINDELL and PD BEAR attended and despite not havin a starting point set off into the estate to try and locate male. BEAR was deployed off lead and started to search the area, it wasn’t long before he picked up a track and within no

time at all had located the male hiding underneath a parked vehicle. BEAR indicated as trained to do so, barking at the male who came out from under the car with his hands up dropping the knife which he still had in his possession. The male was detained under the mental health act and got the support and care he needed. Due to the weather conditions and state of mind of the male it was unlikely that he would have made it through the night if BEAR hadn’t located him.

Both BEAR and his handler PS Geoff Blindell retired together, one is chasing tennis balls the other golf balls!!

Retired PD Bear sadly passed away on the 19th June 2019 with his handler by his side. 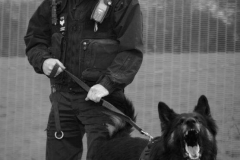 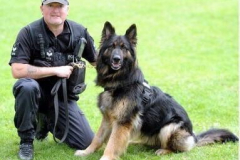 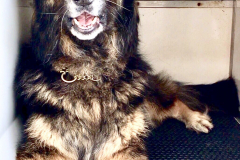 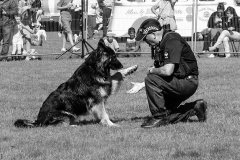